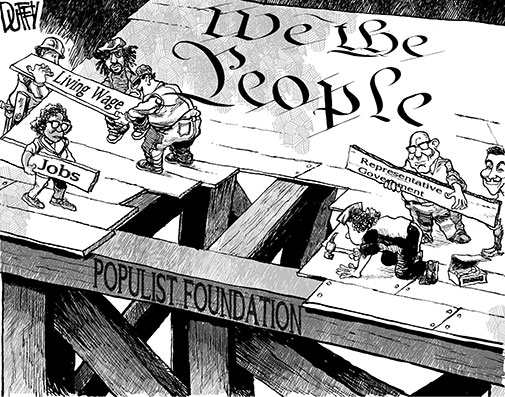 America is ‘trying’ to be great again

One calendar month has passed since Donald J. Trump has been elected 45th president of the United States. Having said that he will win the elections right after he joined the race for the oval office it was very interesting to see people gradually changing their opinions. Perhaps the most shocking moment was when the people who repeatedly said ‘he will never win’ began to say ‘yes, I suspected that because he is a great man’. For the worst, he is just another stage of the populist wave that is currently shaking the western world.

The promise that everyone wants to hear. Better job prospects may convince many, especially people who do not really want to work hard but earn substantial income and brag about fancy job title. Hence so many people in the western world rely on the benefits system. Why work if you can get by and do nothing? If you want to work and have dignity, you will work regardless of the job market situation. The candidate who will shout jobs the loudest will probably attract a lot of votes.

For once there is actually a tracker for an electoral pledge. See for yourself and send him a nasty tweet if he slows down with getting new jobs he promised!

For about a decade now this threat is being a cherry of the electoral race. Not only in the USA but slowly spreading around Europe slowly causing pre-WW2 movement that can be currently seen in events such as Brexit and perhaps soon to be elected Marine Le Pen with her “France for the French” campaign.

The current political situation was dominated by the liberal democrats for a fairly long time now. Distribution of wealth and equal treatment for everyone including the natives and protecting the way they live rather than making them adjust to the new coming cultures. Instead, the ridiculous policies and destabilisation of the Middle East and Northern Africa resulted in bitterness and distrust between people so the populist wave shall continue until people believe the changes occurred on the political stage.